The business case for culture-fit recruitment

Culture isn’t jeans Friday. And jeans Friday won’t generate better margins or more innovation or smarter programs. The heart of our business is culture-fit recruitment. What makes this critical to our clients’ competitive advantage is that it directly impacts an organisation’s ability to fulfil its vision and deliver on its strategy.

We overtly defined the field of culture-fit recruitment more than 10 years ago. To that point, our process challenged clients on what they really wanted and needed – ie being clear on the four to six responsibilities of a role not covered by anyone else in an organisation; determining success for that role in 12 months’ time; and identifying the actual behaviours that would drive that success, specific to that organisation. The behavioural piece quickly became the anchor and, through that, we saw how we were helping clients articulate their culture.

Here is how it works: 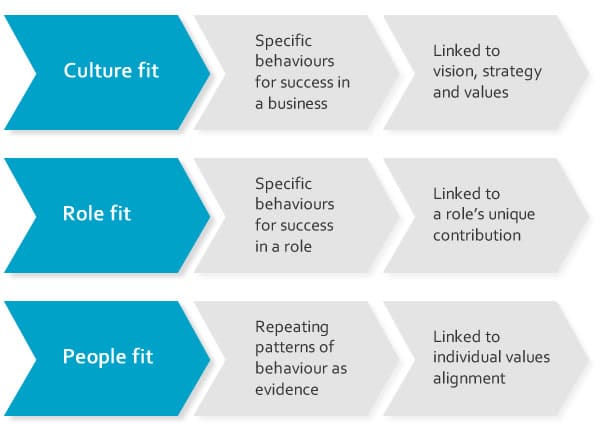 This remains the core of our offer. Time and again, we see the critical impact of behaviours on an organisation’s culture and success. Yet, a lot of role descriptions today are still heavily defined by competencies – eg motivated, autonomous etc – not behaviours – ie what motivated looks like, or what autonomous means in a given context. You can’t identify a competency as important to a business, let alone it being present in a person, until you break it down into behaviours. Take being innovative. In a manufacturing company, that will almost always mean something very different to an agricultural producer or a community service organisation. Defining what you need and want via behaviours is powerful and successfully links people to roles to cultures.

Some of the assignments we undertake come to us after a client has unsuccessfully recruited for the same role several times. Each time, after three to six months, the person didn’t fit or bring what was expected in energy, contribution and engagement. Invariably, their selection was based on how well they interviewed and spoke to broad competencies. That’s the disconnect. If you don’t know the behaviours valued in your organisation, you don’t know what creates or derails your success, and you can’t know what you’re looking for when recruiting.

The power of defining culture via behaviours

Knowing your culture via your desired behaviours becomes vital in three key ways.

Culture-fit recruitment enables you to intentionally reinforce desired behaviours and strengthen desired culture. This means knowing how to support people in living those behaviours and aligning energy and effort to vision, strategy and values.

Culture-fit recruitment enables you to intentionally reshape behaviours. We’ve taken briefs from CEOs who wanted, for example, more collaboration in their business. After defining the specific behaviours – not just competencies – we’ve helped them recruit someone in part to influence greater capacity for collaboration. When done well, and supported with wider effort (one person can’t change culture alone), those desired behaviours can be absorbed into an organisation, reshaping it into the ecosystem needed for success.

Culture-fit recruitment positions you to achieve true engagement. When we help clients define the behaviours necessary for success in their organisation, it often creates a lightbulb for leaders. They start to see their culture through a behavioural lens and can better see why factors such as communicating vision and valuing staff are so important. And it’s not all top-down either. When you know your culture via behaviours, your stated company values will be real and lived. When you then recruit people for culture fit, they can meaningfully align their values to those of your organisation, creating a depth of connection that underpins engagement. Engagement, at the end of the day, is what drives greater value for individuals and organisations.

The business case for culture-fit recruitment is simple but powerful: